Hitler received this pistol as a gift on his 50th birthday from Carl Walther. Hitler was very fond of this pistol and kept it in the desk drawer of his Munich apartment. The pistol was eventually taken by an American soldier in 1945 during the raid of his apartment and was brought back to the United States. The pistol switched hands many times before coming up for auction in 1987. It sold for $114,000 dollars which at the time was the highest price ever paid at auction for a military memorabilia.

Wyatt Earp is one of the most well known lawmen of all time. Working as the deputy sheriff in Tombstone Arizona, Earp was the epitome of the rough and tough wild west man. Earp lived a wild life and worked many trades in his day including: gambler, bouncer, saloon-keeper, and a boxing referee. During his time as a lawman, Earp participated in one of the most infamous shootouts of all time, The Gunfight at the O.K. Corral. During this shootout, Earp along with 3 other lawmen killed 3 outlaws in 30 seconds. This Colt .45 revolver was most likely the gun used during this infamous gun fight which explains why it fetched such a large price.

Jesse James was an American outlaw known for running a vicious gang who carried out many bank and train robberies during the mid to late 1800’s. During his life he became a legendary figure of the wild west. James and his gang robbed over 20 banks and stole 200,000 dollars during their heyday. James was eventually killed by one of his fellow gang members while his back was turned in order to collect the bounty the government had placed on his head. This was most likely the gun that fired those fatal rounds. In 2003, the pistol went up for auction and was sold to an anonymous bidder for the price of $350,000.

Teddy Roosevelt was 26th president of the United States and served from 1901-1909. Teddy Roosevelt was an avid hunter and this shotgun was made by the Fox gun company for Roosevelt to take with him on an African Safari in 1909. In a thank you letter from Roosevelt to the Fox gun company he stated that it was the most beautiful gun he had ever seen. The shotgun was originally sold by the Roosevelt family in 1974, then was eventually sold again in 2000 but it wasn’t until 2010 when the shotgun was sold again for the astonishing price of $862,8500.

This revolver was issued to Texas Ranger Sam Wilson in 1847, but its owner alone isn’t the reason it fetched $920,000. The Colt Walker was specifically designed for use by the Texas Rangers. The black powder Revolver was one of the most powerful handguns ever created. It shot either a .44 cal. roundball or a 220 grain bullet and was superior to a musket up to 200 yards. There were only 1,100 Walker pistols ever made and there are only a few known to still exist. When this revolver went up for auction it drew a lot of attention because of its rarity and the fact that this particular revolver was in nearly perfect condition. These factors caused the auction price to skyrocket.

The Colt Patterson Revolver was the first ever repeating pistol patented by Samuel Colt in 1836. Its groundbreaking design was the first to employ a revolving cylinder to cycle through multiple rounds making it the first repeating firearm. This design laid the groundwork for the modern revolver we know today. The pistol got its name from the city of Paterson, New Jersey where it was manufactured. This particular Patterson was in pristine condition and was considered to be the highest quality, surviving Paterson known to still exist. With all these factors working together, it isn’t surprising that this Colt Patterson sold for almost 1 million dollars.

The Colt Model 1849 Pocket Revolver derived from the Paterson model, but was meant to be more streamlined and transportable. It was also the most widely produced percussion pistol Colt ever made. The Model 1849 was very reliable and well made which made it very popular. What made this specific model so unique was the fact it was inlaid with gold. The beautiful craftsmanship shown on this Model 1849 caused the price to skyrocket, bringing in $1.1 million dollars.

This pair of flintlock dueling pistols belonged to Venezuelan military leader Simon Bolivar. During South America’s revolution against the Spanish empire, Bolivar played a key role in liberating Columbia, Venezuela, Panama, Ecuador, & Peru. He also helped establish the first union of independent nations in Latin America and became the president of this union. His impact on the modern world was huge and many monuments dedicated to his achievements can be found throughout South America. Bolivar was a collector of firearms and this set of dueling pistols were some of the finest in his collection. In 2004 these pistols were auctioned at Christie’s of New York for $1.76 million dollars. 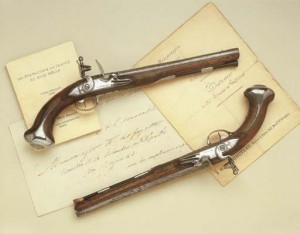 This set of saddle pistols were originally given to Washington by his French ally Marquis de Lafayette and were used by Washington all through the Revolutionary war. The pistols feature beautiful gold inlays and detailed rococo carvings that make the pistols just as much a work of art as they are weapons. After Washington’s death these pistols eventually fell into the possession of President Andrew Jackson who cherished them for most of his life before gifting them back to Washington’s family. In 2002 the pistols were sold at a Christie’s Americana auction for a record breaking $1,986,000 dollars. The buyer was the Richard King Mellon Foundation who then donated the pistols to the Fort Ligonier historic site and museum just outside of Pittsburg.

Proper Protection for You Guns

Like these historical guns, firearms can hold their value for a long time when handled properly. Fort Knox has been in the industry for over 20 years to offer gun lovers like ourselves, handcrafted gun safes that provide safety and security for guns and other firearms. We stand behind the quality and craftsmanship of every gun safe we build and, as part of the Fort Knox difference, we offer a lifetime warranty to ensure that our customer commitment is the best in the industry. Gun safes are what we do. Because Fort Knox manufactures all of our gun safes in the USA, we monitor and control the quality of every product that carries our name. We know every gun collection is unique. Our custom vault builder allows you to build and price your gun safe to match your growing collection.