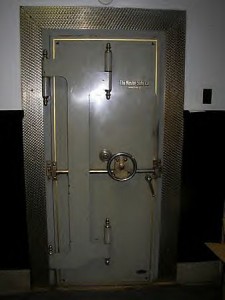 The Bank Vault a.k.a. strongroom was a designated space to store valuables. This space was usually located in the basement of a bank, hotel, post office, or library. As bank robbers became more skilled at breaking into strongrooms, vault technology changed.  In the 19th century, vault builders began to construct their vaults out of steel-reinforced concrete and the walls would often be more than a foot thick. These vaults were virtually indestructible and weighed hundreds of tons. 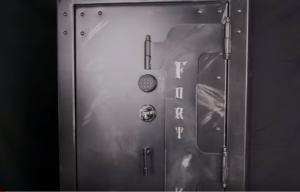 There are quite a few differences between the vaults of today and those of the 19th century.  Modern vaults are much lighter, thinner, and more affordable.  This can sometimes mean that the manufacturer has cut corners where the integrity of the vault is concerned though.  The highest quality modern vaults mesh the best features of the old with the best features of the new to create the ultimate vault. A prime example of this is the 2S Crane hinge and the distressed look vault from Fort Knox.  This vault melds together vintage elements like the crane hinge and classic craftsmanship with more modern touches like the distressed finish to create the ultimate vault.