Using a safe or vault is indeed one of the best ways to keep your belongings secure. In fact, national governments and well-known companies use them to ensure the security of sensitive and valuable items.

Read on and get to know some of the most noteworthy safes and vaults. 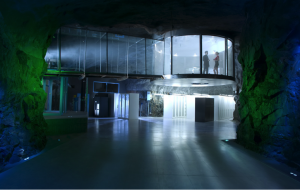 Founded in 1994 by Oscar Swartz in Uppsala, Bahnhof is Sweden’s first independent internet service provider. This safe house is located a hundred feet beneath the surface of Stockholm and is home to the servers for Wikileaks, an international online organization that has been publishing top secret information since 2006. Protected by a steel door that’s 1.5 feet long, Wikileaks has successfully published over 1.2 million documents just a year after its launching.

The genealogical library of the Mormon Church is protected in this stronghold. Buried more than 600 feet beneath the surface, it safeguards billions of images on microfilm. Important files that had been obtained from all over the world are stored here. All documents are also being digitized so they could be made available to the public through websites like ancestry.com. A group of armed guards as well as a door that’s nuclear-blast-resistant and weighs 14 tons, protect the facility

Located 80 feet underneath the streets of New York and protected by some of the world’s best security experts, the Federal Reserve Bank holds 25% of the world’s gold. Almost $300 billion worth of gold bullion are tucked in this bunker in the form of more than 500,000 bars. They are surrounded not only by solid rock from all directions, but also by a door that weighs 90 tons.

This former limestone mine houses a vast expanse of vaults that cover 1.7 square feet. The identities of most of the vault owners are unknown to the general public. What’s known is that the government of the United States of America is the biggest tenant, and the Smithsonian Institution and Warner Brothers own some of the vaults. Numerous photo negatives, unabridged film reels and important documents have been hidden here for decades. The data center Room 48 is also protected here as it supports some of the biggest enterprises in America.

Even if you can’t store your belongings in these safeguarded locations, you need not worry.  You can still keep them secure if you purchase a state of the art safe and choose the best place to store it.